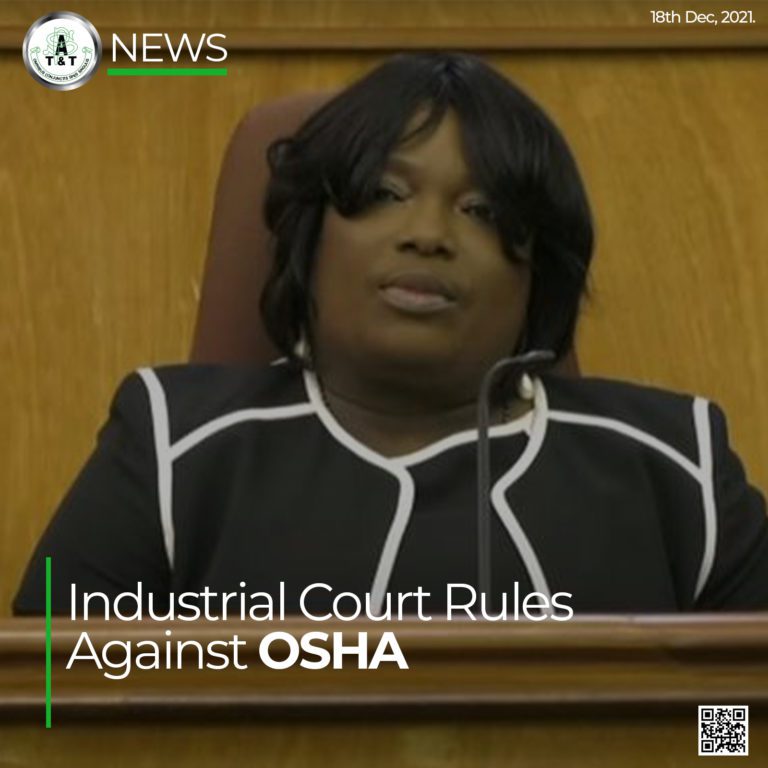 An Occupational Safety and Health Agency’s(OSHA) retirement policy that was not discussed with the Banking and Insurance and General Workers Union(BIGWU) will cost the OSH agency 750,000 dollars.

Yesterday, the oral judgement was handed down by President of the Industrial Court, Deborah Thomas-Felix, who ruled that the OSH agency was guilty of an Industrial Relations Offence and trade dispute.

“The behaviour of the agency to unilaterally introduce a retirement policy without any discussion or agreement with the recognized majority union was harsh and oppressive and contrary to good industrial relations practices,” Thomas-Felix said.

Although the agency was found guilty of an offence, the court did not impose a fine but strongly reprimanded the agency. It urged the agency’s management to adopt a more consistent approach to collective bargaining.

Speaking to PSA Media on the matter, Wesley Francis, BIGWU health and safety and labour relations officer, pointed out that the worker had enjoyed a series of three-year contracts since 2007 when he worked with the forerunner agency to the OSH agency; the factory inspectorate.

“Therefore, in view of, ILO(Industrial Labour Organisation) conventions he should be considered permanent, based on the fact that his employment was continuous in nature and that the fixed-term contracts were also continuous with no breaks in service,” Francis said

He explained: “But by virtue of introducing the retirement policy without discussion or agreement with the union and the fact that the policy never existed previously in any employment contract of this inspector or any other inspectors deemed that the decision not to renew his contract was actually a termination that was void of the previous process and contrary to good industrial relations practice.”

Francis accused the executive of the OSH agency/authority of working back-to-front. He said: “In that administrative portfolio they seem to be incapable of providing proper guidance on how the agency ought to operate.” He stated that it was not the first trade dispute that the agency had lost and seems to have not learned from their errors. “Regrettably, it is taxpayers who will pay the ultimate cost, because monies will not be coming out of the agency/authority pocket.” He said.

According to Francis, another worker who was also affected by the retirement policy is now taking her matter to court. That employee, he noted, was not part of the recognized majority union.