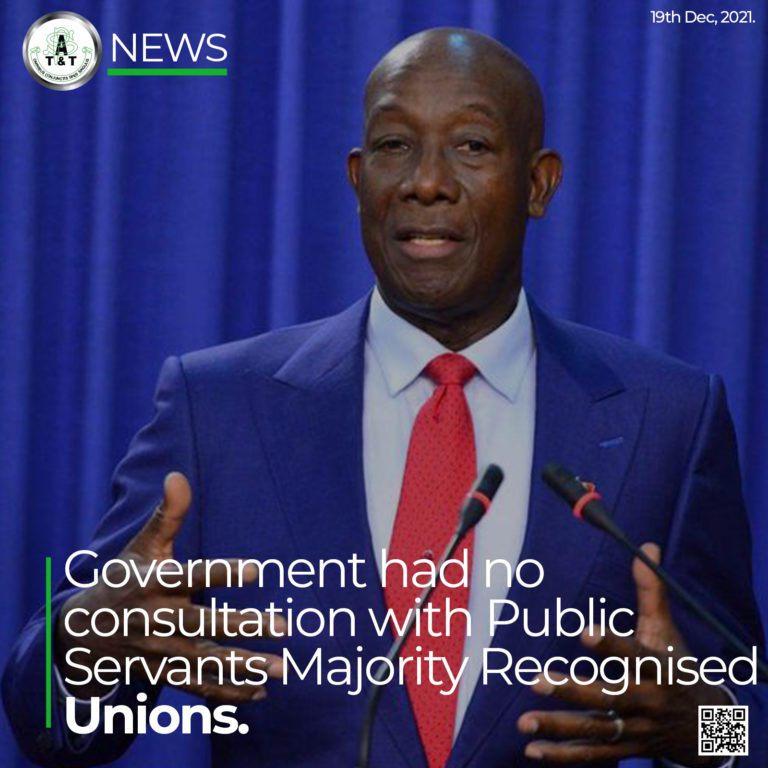 Before the decision to implement a safe zone policy in the public sector was dictated, there was no consultation between the government and the Public Services Association(PSA) or any other trade union.

That acknowledgment came from the Prime Minister, Dr. Keith Rowley during the question and answer segment of the media conference that Dr. Rowley hosted.

In answering a question posed to him by a reporter, who asked if the government had consulted with the PSA, considering that the association was the majority recognized union of public sector employees. Dr. Rowley responded: I am sure that the list of people that you mentioned there they are part of the national effort in understanding that there is a pandemic going on and if their position is different from us then we understand that, but this is a matter of life and death. This is not a matter to be determined by who can talk louder than who or who has more power than who.”

However, he claimed, “Between now and the middle of January there would be lots of opportunities to interact, and if there are improvements to be had to the government’s intention we are wide open to that.” He noted that Attorney General, Faris Al-Rawi, would be in charge of leading those discussions.

Speaking at the behest of the Prime Minister on the required legislation that would make the country’s largest employer impose a safe zone policy at its workplaces, the Attorney General said that the government will not require a special majority to pass that legislation. He said: “We have carefully considered that issue and taken wide advice on it.” He noted that his office has had discussions with other regional leaders and world leaders and has studied numerous cases and judgments across the world.

He further pointed out that state enterprises, regional authorities, and the Tobago House of Assembly(THA) are all creatures of statute law and would therefore be compelled to follow the mandate set out by the public health ordinance that would be placed before parliament in mid-January.

Asked if teachers would also be required to take the jab since not all students were vaccinated, and thus schools could not be labelled a safe zone. The Attorney General stated: “All teachers fall under, in the public sector side of it for sure, all teachers fall under the position and the position is for all teachers to be captured by this law as well.” He noted that schools did not follow the classical version of a safe zone where both staff and patron were vaccinated and the same would be the case in the public sector at this point.

However, AG Al-Rawi noted that the new policy would exclude teachers who had medical concerns.

Like most trade unions, the PSA has maintained that vaccination should be the choice of its members as well as citizens and should not be a prerequisite for workers to earn a living.