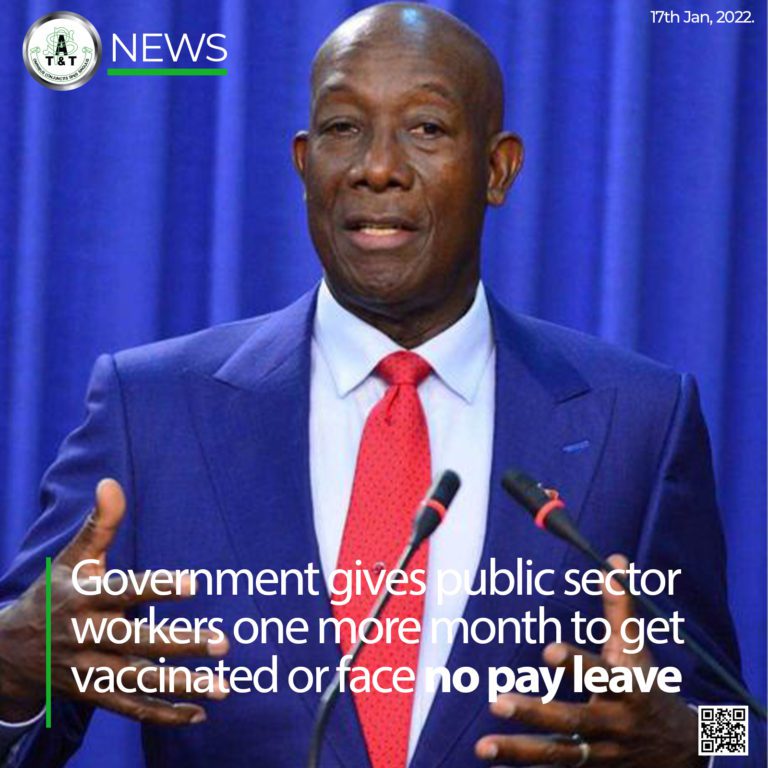 According to Prime Minister Dr. Keith Rowley, the choice is still there. This as he announced that the government made the decision to implement its public sector vaccine mandate on February 17th, 2022.

The policy was initially set to take effect this Monday.

With many unions aggressively voicing their concerns since the Prime Minister’s announcement one month ago, defending ones right of choice whether or not they choose to take the jab, the Prime Minister said that vaccine numbers in the public sector have improved.

“I am very pleased with some of the reports we got from the public sector that we have improved some of our vaccination…we don’t expect that overnight everyone will change their views,” he said.

He noted that Trinidad & Tobago’s current position is better than what was foreseen by the government in mid-December taking into consideration the rapid spread of the Omicron variant and as such, Attorney General Faris Al Rawi will continue to monitor the situation as things continue to change.

“Because of how the last three weeks have gone, because we are in a more slightly optimistic viewing of Omicron because our health system has not been overwhelmed as the projections were, I have asked the Attorney General to take a little more time and of course, it can’t be forever,” he explained.

Dr. Rowley further stated that they will be determining where exactly will be safe zones within the public sector. He said, “The government will legislate and be in the same position as the private sector to determine which areas of governmental operations can operate under the legislation as safe zones are being attacked too.”

The Prime Minister further announced the appointment of a five-member committee to examine the level of care in the country’s health care system, including COVID-19 deaths, and report to the Government in one week time; a report which will be made public as there have been continuous calls for transparency regarding government’s covid-19 numbers as well as doubt.

According to the committee’s term of reference, it is expected to identify the profile of the patients who died from COVID-19, review the definition of “COVID-19 death” used by the Health Ministry for consistency with the World Health Organisation guidelines and standard practice and comment on the different methodologies for calculating case fatality rate.