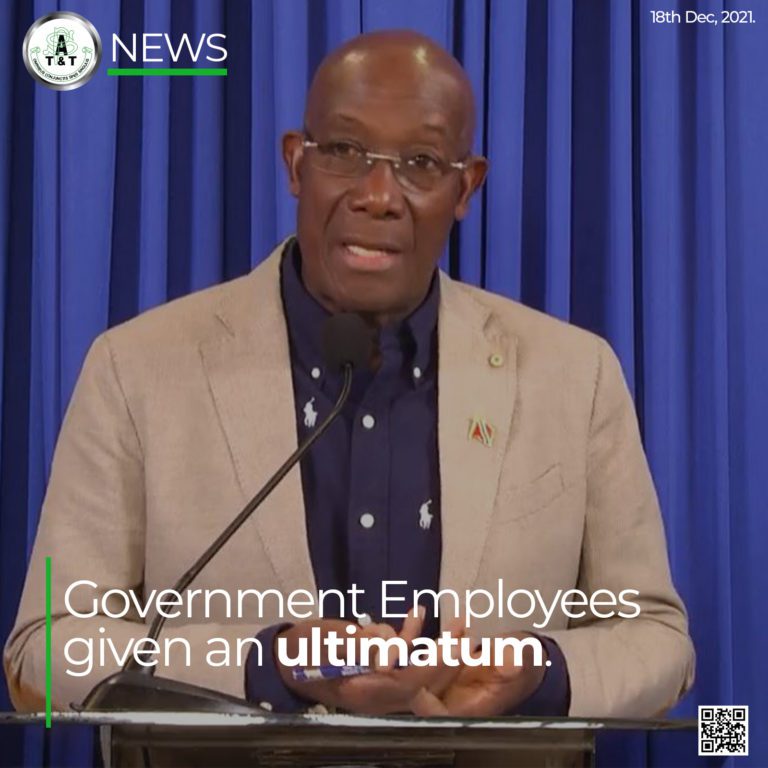 Insisting that the government is not mandating anyone to get vaccinated, Prime Minister, Dr. Keith Rowley has announced that all government employees who are not vaccinated by January 3 will have problems at the workplace. The alternative to vaccination, according to the Prime Minister; leave without pay.

The Prime Minister was speaking at a media conference which he hosted and pointed out the low vaccination rates in several government institutions that he said required that the government intervene. Using a chart to demonstrate his point, Dr. Rowley showed statistics from several government agencies including the various Regional Health Authorities(RHA), the Ministry of Health(MoH), and protective services.

Speaking on the protective services he noted that out of a total of 7955 police officers just 49 percent were vaccinated, prisons out of 3,400 had a 35 percent rate. With the defense force even lower at 30 percent with 5400 members.

Dr. Rowley scoffing at the statistics of the protective forces noted: “The operational daily interaction of people in these departments, one will expect that they would have appreciated. They room together in some cases, they share motor vehicles on an ongoing basis, they share offices.” Dr. Rowley also noted the 25 percent vaccination rate of immigration officers with a 723 staff size. He said: “The very first people that any traveler is likely to meet with is immigration and they are 25 percent vaccinated. Fire Services 20 percent.”

He said it is due to this low vaccination rate among key players in the public sector and the government being the largest employer that they now have to follow in the footsteps of the private sector who he stated was ahead of the government in putting policies in place to ensure that their workers got vaccinated. He said that the government has now decided to put a vaccination policy come mid-January at the government’s workplaces. Barring those who have medical reasons for not taking the vaccine, Rowley noted every other public sector employee will be required to be inoculated.

However, he noted: “If you are not in a position to come to the workplace, you will be on leave and on your own and forlorn.” Dr. Rowley in explaining said: “Meaning you will still have a job at the establishment but you choosing not to come to work under the conditions laid down you will not be paid.”

In giving Public Sector workers some time to get vaccinated Dr. Rowley stated that from Christmas Eve to January 2nd the public sector will be closed and on January 3rd the new policy will begin to affect workers. He urged that they take this off period to get vaccinated as the health workers will be waiting. He noted that that period does not apply to essential workers though.

According to figures provided by the Prime Minister during his presentation, there are about 95,490 workers that are employed with the government. Of that figure 32,671 work at state enterprises and 62,819 in the public sector and with a vaccination rate that has remained stagnant around 45 percent for some time Dr. Rowley stated the government has now acted.