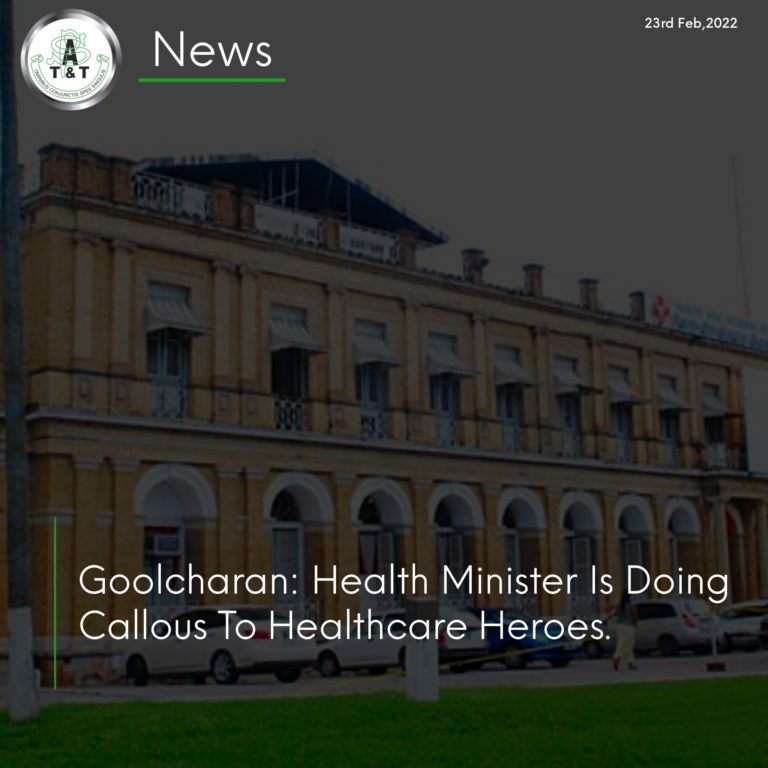 An Industrial Relations Officer working with the public services association (PSA) has responded to Health Minister Terrence Deyalsingh’s statement that during a pandemic there is no patient to nurse ratio.

Minister Deyalsingh had made the comment while speaking at the Health Ministry’s media briefing on Saturday. The comment was made in an attempt to answer a critique put forward by the committee appointed to investigate the high death rate among Covid-19 patients in this country.

In a Whatsapp message sent to PSA Media, Goolcharan asked, “How can the Minister of Health be so callous to our healthcare heroes?” He went on to say that since the pandemic had reached the shores of Trinidad and Tobago in March 2020 and the borders were reopened there was a mass exodus of healthcare workers leaving to seek opportunities elsewhere. Goolcharan noted that workers were not only leaving because of better remuneration packages but were also doing so due to the mistreatment and lack of professional standards and best care practices that they faced here.

Although the Health Minister at the media conference on Saturday stated that the government had hired 1,776 people to work in the parallel healthcare system, Goolcharan said the truth is that the pandemic was poorly managed from the beginning. He reasoned that the priority was never on human resources and asked, “What type of care can you or your relatives receive when there is a staff to patient ratio of 50 to one or even 20 to one.” He added, “What kind of planning is that!” He noted that a system that never did a manpower audit to ensure the prerequisite staffing for all institutions has failed the citizenry. He said that the real question remains: “Why did the system fail to address the human and material resources deficit?” Hiring just over 1000 plus staff was just a drop in the bucket, Goolcharan stated.

Outlining the numerous responsibilities that healthcare workers had to perform on both the general wards and the parallel healthcare system including the basics such as feeding, tidying, giving medications (oral and intravenous), etc, Goolcharan said the present arrangement was a disaster for healthcare workers who were being further persecuted by having them do longer hours and limited leave even when they had contracted the Covid-19 virus.

He further noted that hospitals and other institutions were lacking basics such as sanitisers, hand-soaps, gloves, and other protective gear and needed better access to those.

When the Covid-19 committee’s report that was chaired by Professor Terrence Seemungal was laid in parliament on Friday, one of the main points presented by the committee was that the staff at the parallel healthcare system needed to be cared for better for the death rate to be reduced.

It has been a point that PSA IRO Ricardo Goolcharan had always presented when allowed to speak on the matter.