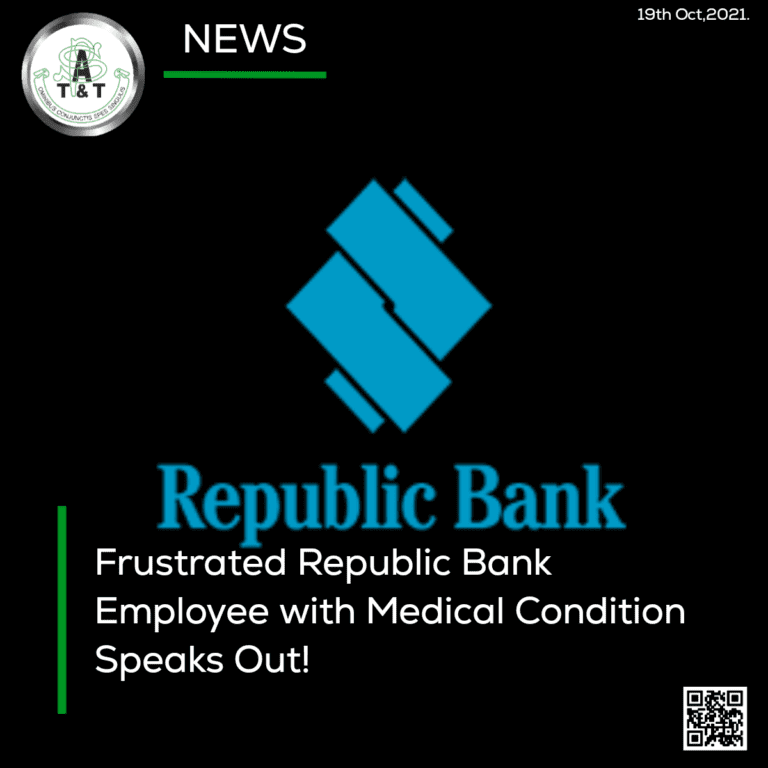 “Noone is going to pressure me to take the vaccine.”

So said a Republic bank employee who suffers from various ailments that have made her vaccine-hesitant.
The worker who said she has worked at the bank for several years also told PSA media that the doctor she usually visits has been abroad for a few months and she had to turn to other doctors who she knew in the past. One of which is a doctor that works for the aforementioned bank.

The woman said that one of her main grievances was that she was worried that her concerns have been hastily examined by at least two doctors she spoke with, one being one of the bank’s doctors. In speaking to PSA media, she said that before she visited that doctor he had already told her when she visits he may try to convince her to take the vaccine. She said another prominent doctor who she knew and spoke to casually on the matter had told her, if she is worried about her health status then she should take the Sinopharm vaccine since its potency is less severe.
She said, “They told me this and they did not even see me as yet. It made me feel like these people think that they are sharing out Panadol.”

The woman, who is in her 40s explained that she suffered from a blood-clot disorder that seemed to be hereditary and went on to explain that she had a partial amputation in her feet because of a related condition. She noted that her mother came from a family of 13 brothers and sisters and today there were only four surviving members since most including her mother had died at a young age from complications akin to the same blood clot disorder that she had inherited and the others from other heart-related ailments.

In addition, she noted that one of her last surviving aunts who resides in the United States had taken the Moderna vaccine and had gotten a stroke one month later. She pointed out that before the vaccine that aunt who she said was 72 years old was very active and was still working.

The bank employee who preferred to remain anonymous to avoid victimization at the workplace pointed out that Republic bank had given employees September as a “grace period” to avoid disciplinary action being taken against them. She told PSA media that she had asked one of the bank’s doctors to give her a six-month exemption so that she could get more data regarding her condition because of her unique medical history, but was told “no” by the bank’s doctor. According to her, the doctor had said that it’s 50-50 but he is not putting his reputation on the line. She said I asked: “But I must put my life on the line?”
When asked by PSA media what does she want from the situation, she said, “All I want is for the bank to respect my decision not to take the vaccine and not be forced to expose my medical history.”

However, the woman said, since the grace period was supposed to end on October 6, this week she was asked about her polymerase chain reaction(PCR) test but did not produce any among other workers. She said, “We do not know what management might be cooking next Monday because they have already asked if we did not take the vaccine.”

The woman also noted that the bank has limited employees to only three designated companies that they are willing to accept the PCR test from. And those places as stated by her were more expensive than other establishments.

When asked what did the union have to say about the matter, she pointed out: “This is unexplored territory in Trinidad and Tobago so everyone is kind of waiting to see the outcome of our case.”

Last month, the Banking, Insurance, and General Workers’ Union (BIGWU) filed a petition against Republic Bank Limited in the Industrial Court. The union called for the bank to end its return-to-work policy.

According to the bank, unvaccinated employees must produce a PCR test every two weeks. This policy is, however, against the law as stated by section 12 and Section 37: 1 and 2 of the OSH act.