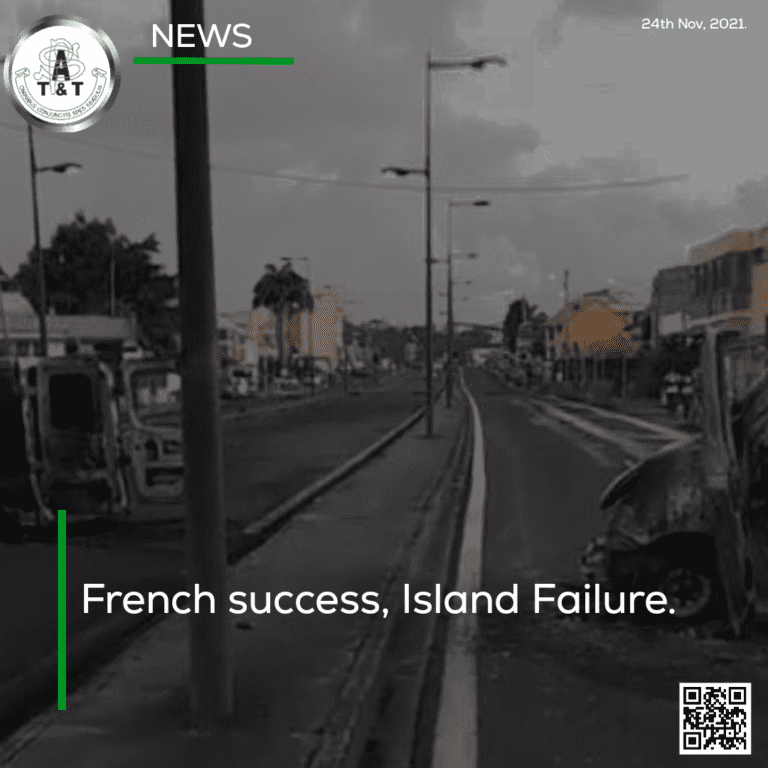 Gunshots have been fired at police officers on one island in the Caribbean archipelago on Monday and special forces troops from France had to be deployed in another over the weekend. The violence erupted in two of France overseas territories when trade unions united against a mandatory vaccination policy. The policy was mandated by the Central government in Europe which asked persons to provide a coronavirus health pass to access restaurants, cafes, cultural venues, sports arenas and for long-distance travel.

However, the violence which began in Guadeloupe and Martinique has its roots in an announcement made by French President, Emmanuel Macron announcing in July that mandatory vaccination would apply to anyone who comes into contact with vulnerable people, including doctors, nurses, office staff, and volunteers.

“They must be fully vaccinated against the coronavirus by 15 September or will risk not being paid.” Macron said at the time.

France had pushed back the vaccination policy for healthcare workers in its Caribbean territories from November 14 to December 31, however, the unions have said that the unjust penalising and suspension of healthcare workers who are not fully vaccinated must stop. There has also been a call to stop using schools as massive vaccine centers, which strikers say is a form of “propaganda”.

Meanwhile, in Martinique, on November 15, a day after the vaccination policy for healthcare workers was set to begin, at least 20 trade unions signed and released a list of at least 13 demands of their own that workers had. Some of those demands included the immediate end to the mandatory vaccination policy, salary increases, for minimum wages to be pushed up, cap on fuel prices, there are also concerns over the government’s controversial pension reform, which strikers want abandoned, other demands relate to increasing protection for taxi drivers and workers in the performing arts, sectors which have been hit particularly hard by the Covid crisis. Finally, the strikers are also calling for the government to pay for tests to diagnose symptoms linked to chlordecone, a pesticide used in banana plantations in Martinique and Guadeloupe from 1972 to 1993, despite the knowledge of the dangerous side effects as early as the 1960s. More than 90 percent of the adult population in Guadeloupe and Martinique has been contaminated by chlordecone, a study by public health body Santé Publique France showed in 2018. As a result, the region has one of the highest levels of prostate cancer in the world.

On the mainland, France the mandatory vaccination of its healthcare workers began on September 15 and, The Economist, a leading international weekly newspaper printed in a magazine format has stated that the safe-zone initiative that allowed only the fully vaccinated to enter restaurants, bars, trains, and other spaces was the main cause for a spike in inoculations, whereby France had been considered the most vaccine skeptic and hesitant country before the initiative.