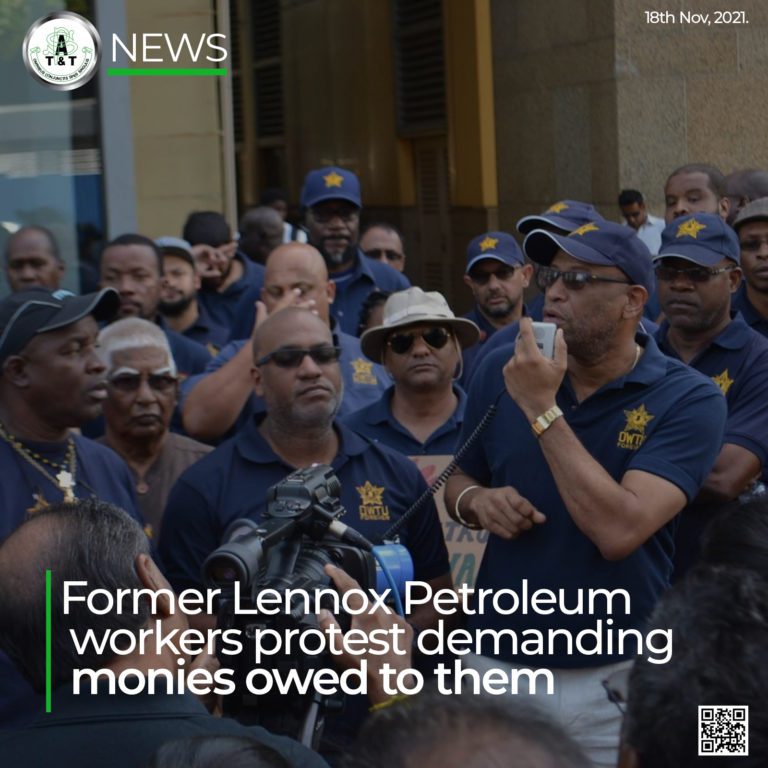 Former employees of Lennox Petroleum Services Ltd staged a protest outside the company’s compound at Princess Margaret Street, San Fernando on Wednesday. The workers are demanding that the company pay the money owed to them after a court judgment in their favor.

PSA Media spoke with Shop Steward and worker’s representative Vernon Perez on Wednesday afternoon who explained that a motion of noncompliance was filed against CEO Wayne Persad on June 1st, 2020.

He said a motion such as this usually takes 6 weeks but it has now been 6 months and nothing has been done by the court.

“We filed a motion of noncompliance, meaning that when you’re in contempt of court, in order to come and seize your assets and close it down…we filed this on the 1st of June. Usually, this kind of motion takes only 6 weeks, now it’s 6 months and we have not heard from the court,” Perez said.

In December 2020, ex-Lennox Petroleum workers staged multiple protests spilling into the New Year, over the company’s alleged refusal to pay over 300 people a total of US$9.6 million. Eve on Christmas morning, the protesters, who are members of the Oilfield Workers’ Trade Union, gathered at the company’s headquarters at Princess Margaret Street, San Fernando before venturing to the CEO’s home at Vistabella. When they arrived, they quietly walked around in the road, waving flags.

In July 2020, the Industrial court-ordered Lennox Petroleum to pay the money owed by the end of September that same year, but the company failed to comply. At the time the union had already begun looking into charge the company for contempt for not complying with its orders.

Even though this worked in their favor, Mr. Perez claimed that the company’s CEO is currently in Miami, still refusing to comply.

According to Perez, “He has not contacted us to speak about our money. We have 3 judgments against him and he’s just ignoring us.”

Adding that they have done everything within the law in addition to the SOE being lifted on Wednesday, Perez said protests will continue and they are also pressing to have assets seized.

“The next step is to have the court lock him down and seize his assets. We file the motion for that already and that is what the court is to do,” Perez declared.