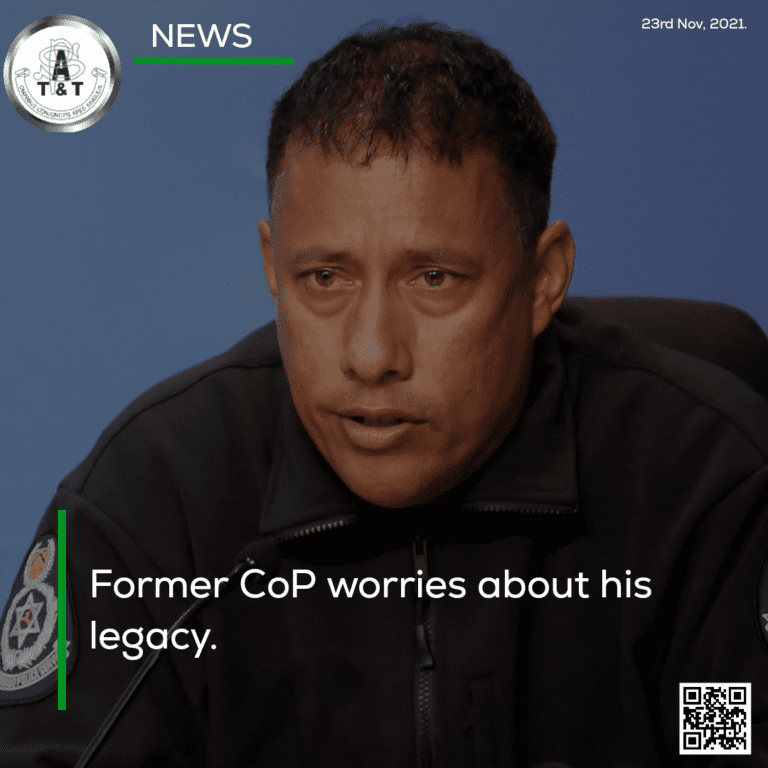 While Former Top Cop, Gary Griffith has not said a word about rumors and controversies that his name has been mentioned recently, that has not stopped him from voicing his opinion.

The latest has been the former commissioner sending out a WhatsApp message to reporters stating, “Deafening silence as the dismantling of the national security apparatus continues.”

According to Griffith, this has been the overall tone of many messages that he had received, “Regarding plans about a major reshuffling of specialist units within the TTPS, and the dismantling of SORT.”

As pointed out in the social media message, the Special Operations Response Team(SORT) was the brainchild of Griffith’s tenure in office, and as a team of specially trained and hand-picked police officers and soldiers was designed to assemble quickly and work efficiently to support other units of the Trinidad and Tobago police service(TTPS).

However, SORT has not been without controversy. Two of the better known: The Drug Sou-Sou(DSS) operation, in La Horquetta, where a defense force soldier working with the SORT team was caught on camera stuffing a block of cash into his tactical uniform and more recently the charge of misbehavior in public office being leveled against the former head of the team, Mark Hernandez. His charges arose after the Professional Standards Bureau had investigated the treatment and subsequent deaths of suspects held for the murder of court clerk, Andrea Bharatt.

In the WhatsApp message, Griffith noted, “Whilst reserving personal comment, I will share what others had to say.”

The subsequent message from one of his alleged contacts reads: “If we are dismantling units for the actions of its members, should the coast guards SNU be shut down because one of their own killed a policeman.” The former commissioner went on to explain: “The person was, of course, referring to the tragic incident which occurred over the weekend where two members of the Defence Force lost their lives.”  According to Griffith, the person had responded to one of his statements by saying, “There were no convictions for SORT officers in the Belcon and Morris deaths, but that was the reason they gave for dismantling SORT.”

According to Griffith, in another correspondence he had, someone questioned why SORT was targeted since they were only responsible for 10% of all police killings. It continued: “When other units have been five times more involved and even though SORT was the frontline unit in armed confrontations with criminal elements.”

He stated that another person had asked: “Can we expect the Prime Minister to dismantle the cabinet because of Marlene McDonald’s charges, and then went on to suggest that there is a heavy political price to pay for doing this given what happened when SAUTT was dismantled years ago.” He stated that the person then went on to say that: “People who condemned when the previous administration dismantled SAUTT are now silent or even in support of this, which shows their hypocrisy.”

One of the last comments that Griffith claimed to have received noted: “The unit that put fear into the hearts of criminals, pegged back gang warfare, stopped kidnappings, by apprehending offenders, who were instrumental in major drug buss, being dismantled is a victory for the 11% who don’t want you at the helm, so the criminal underworld is laughing all the way to the bank. This is also a victory for those who don’t want you back because you pose a political threat.

Last month about 20 workers hired by Gary Griffith saw their contracts suddenly terminated. On that occasion, the reason given was to cut the cost to help the TTPS run more smoothly as some of the salaries paid to these contracted workers who were not police officers were as high as 42, 000 dollars.

According to at least one of the persons who was retrenched, they were called into a meeting chaired by DCP McDonald Jacob who relayed the information.

In one of Griffith’s correspondences, someone had questioned the power that Jacob appeared to be wielding as DCP and interim head of the TTPS. The person noted, “That as an accounting officer and not an acting CoP, he shouldn’t be making such sweeping changes, especially in light that we have a new police service commission(PoLSC) who theoretically could send a merit list to parliament so that the new Commissioner of Police could be appointed in less than a week. Even when we had a substantive commissioner or acting commissioner, never before did they make such changes as we are seeing Jacob is making now.”

On Sunday, police commissioner Gary Griffith also sent out messages after at least two daily newspapers had written stories concerning an exchange between the Prime Minister, Dr. Keith Rowley, and the former commissioner, Gary Griffith, which ended up in the public domain after the Prime Minister and Griffith had a disagreement over private and public property and whether Griffith had the authority to ask his officers to enter.

Using social media comments as his mouthpiece, and as with the rumors surrounding the dismantling of SORT, Griffith once again pointed out that he would not be saying anything on the matter presently. However, he provided some opinions from persons who had defended his position at the time.

One person who claimed to have read one of the newspaper articles on the issue stated: “As I read today’s Sunday Guardian headline article, I could not help but think that in an attempt to discredit Gary Griffith by linking text messages and the letter he wrote to the PSC, the Prime Minister showed just how much of a bully and a dictator he is and that he is insanely jealous of Griffith’s popularity.”

Another read: “Like a jilted lover, Rowley seems intent to do anything to force a wedge between the public and their new darling Gary Griffiths.

Noting a Facebook post posted by an experienced journalist, Paolo Kernaham that defended him. It read: “A true leader doesn’t obsess over narrow perceptions of personal slights and disrespect from subordinates. A leader is more focused on performance and results rather than deferential genuflection to a tin God.

Because most people in this government have no concept of what performance or results look like they are more preoccupied with outdated ideas of reference for leadership.

I might disagree with GG’s style and many things he has said but I will defend his right to challenge any public official once he can support his position. Vigorous debate and yes, outright criticism, is fundamental pillar of a democratic society. Nourishing a culture of yes-men and women-only ensures our continued failure

At any rate, the last person on earth to speak about the decorum in public office is the man who tells citizens, “Kiss my ***.”

According to Griffith in the last messages he sent on the SORT, he said, “In the end, as I said above, I will reserve comment, because I know the ultimate judge is the citizens of our country. But as this plays out, I can promise the nation two things. One, I will listen to their voices for guidance, and two, I will continue to be a conduit through which their voices can be heard.”