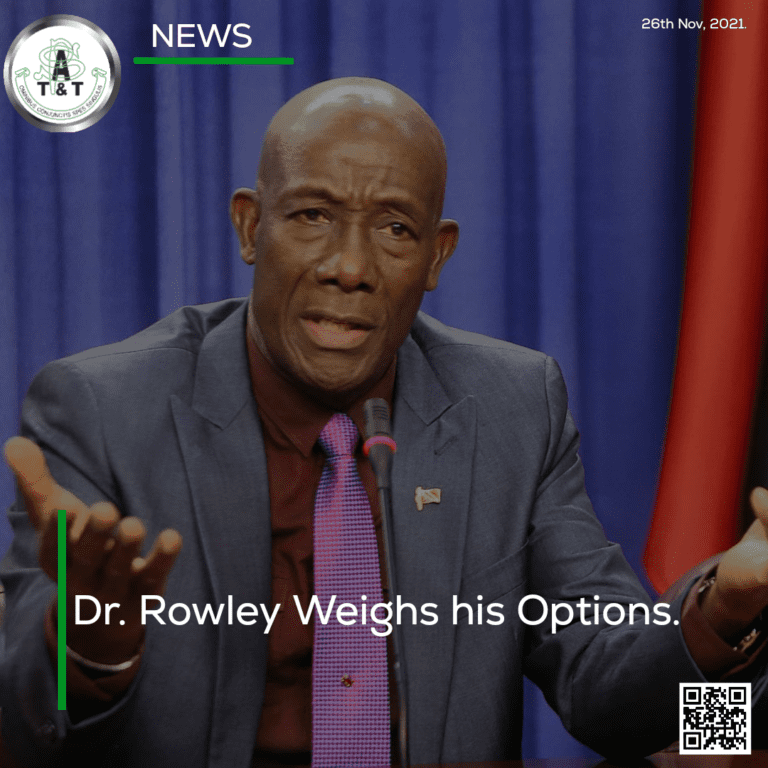 Prime Minister Dr. Keith Rowley has given the nation a “heads up” as to the many approaches the government can take to increase the vaccination rate in the country.

Pinning his hope on vaccination as the remedy to the already overburdened healthcare system, the Prime Minister outlined a long list of measures that other countries internationally and regionally had already adopted to help fight the invisible coronavirus enemy.

“Throughout the pandemic, New Zealand has been regarded as one of the countries that was fighting the virus most successfully. They are 83 percent vaccinated and hoping for 90 percent, but a current wave has resulted in lockdown in operations of bars and restaurants and cinemas, etc that were safe zones. A vaccine passport for very normal activities is to come onto being in New Zealand, on December 2nd.” Continuing on New Zealand the Prime Minister said: “New Zealand, a country of 5 million people is currently reporting new infections of 200 cases per day with 40 deaths so far.”

In comparing, Trinidad and Tobago’s case with New Zealand’s, the Prime Minister noted: “New Zealand will require teachers and workers in health and disability sectors to be fully vaccinated against Covid-19. Just yesterday, New Zealand announced that it will keep its borders closed to most international travelers for a further five months. Fully vaccinated, international travelers will be able to enter the country on April 30, 2022.”

Closer to home, Dr. Rowley outlined the mandatory vaccination policies in the United States and pointed out that in Canada, passengers wishing to access air, train, and ship transportation have been required to declare their vaccination status.

In the Caribbean, Dr. Rowley began by highlighting the case of Barbados which he said has 50 percent of their population inoculated yet is running a 9 pm to 5 am curfew. “Antigua is 50 percent vaccinated where ages 12 to 18 who are unvaccinated cannot attend school. Unvaccinated government employees must remain away from work without pay. There is a state of emergency that runs until December 22 in Antigua.” He also went on to mention the public health regulations mandated in Jamaica and also the violent push back against the mandatory vaccine policies in Guadeloupe.

Other countries such as Austria he noted had more stringent measures such as a total lockdown of unvaccinated citizens that began on November 15, or the case of Latvia that passed a law giving employers the option to fire workers who refused to take the vaccine or transfer them to remote work. “Singapore meanwhile has opted for a financial incentive to get people vaccinated. Announcing that at 8 December it will no longer pay the Covid-19 medical bills for persons unvaccinated by choice.” Rowley said.

According to the Prime Minister he took the road to go through the situations and decisions that other world leaders had to take, “So if it ever gets to a point where we have to adopt any of these additional measures it will not be because we are incompetent, arrogant, dictatorial or anti-democratic. It will simply mean that our situation demands it.”

Nevertheless, the Prime Minister stated that he has not ruled out the reopening of beaches for Christmas but will keep an eye on the numbers to see where it is going. If there is no further significant deterioration, reopening could start with early morning hours from 5 am to 12 noon.

“We have reached a critical crossroad in the management of the COVID-19 pandemic in T&T. Based on the increasing number of COVID-19 cases over the past weeks, and with no decrease in sight, the number of deaths has continued to increase with dozens of persons losing their lives on a daily basis,” Rowley said while lamenting the slowing down of the vaccine rate in the country presently.

Despite fears that the parallel healthcare system faces the possibility of being overwhelmed, Dr. Rowley spoke to the resilience that the country has to adopt even in the face of a mutating virus, but he asked that people show more personal responsibility in the face of the adversity.

“Unfortunately, it seems as if persons have become desensitized and the population is no longer stirred to wise action by this alarming trend. There is little change in public behavior and attitude as well as a drastic reduction in the rate of vaccination. Even in the face of increasing Covid-19 deaths. There is also lots of information that many persons hide their condition, refuse to be tested or isolate when they know they are sick if only to be allowed to circulate as normal.” Dr. Rowley cautioned against that type of behavior saying it only shows up in the Ministry of health’s epidemiological reports, the Health Ministry’s daily updates, and in the hospital wards.

Dr. Rowley reiterated that quarantine, vaccines, mask-wearing, sanitization are tools to help in the fight against the virus and implored the population to use them to help.

In the address to the nation that lasted a little over 45 minutes Dr. Rowley noted: “Even as I was preparing this presentation (on the previous night), I received the depressing news that a new variant has appeared in Botswana, which some scientists are already saying could be worse than nearly anything else about and it may even become vaccine resistant.”

Earlier this week, scientists from the United Kingdom warned of the appearance of a coronavirus strain, which contains 32 mutations, in Botswana. Many of the mutations indicate its high transmissibility and resistance to vaccines, the strain has more changes in the spike protein than all other COVID-19 variants. This new strain forced the World Health Organisation(WHO) to convene an emergency meeting that is carded for today.