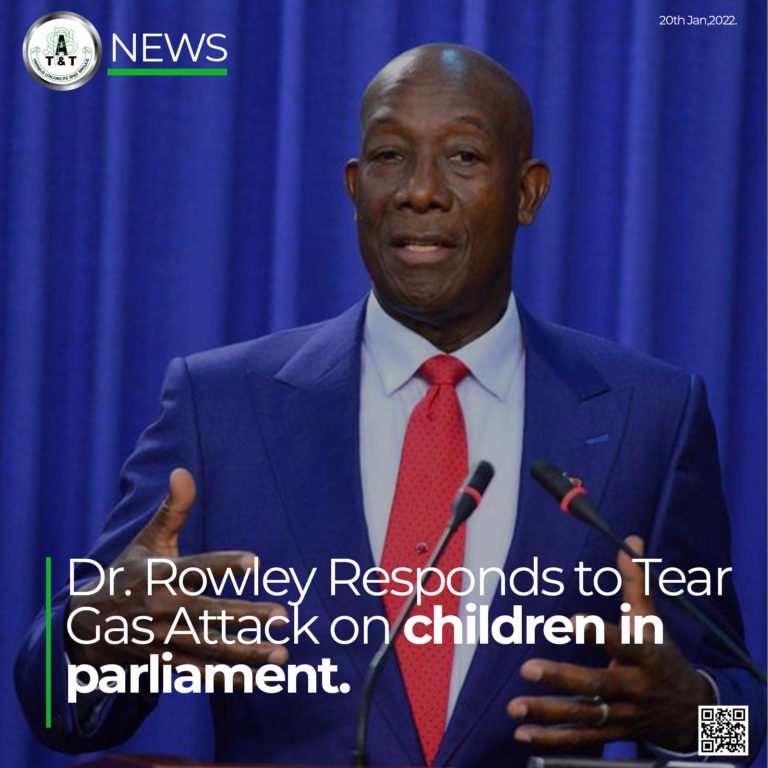 Prime Minister Dr. Keith Rowley has blamed parents for putting their children in harm’s way at Sunday’s protest around the Queen’s Park Savannah(QPS).

The Prime Minister was answering a question directed at him in parliament on Wednesday’s 14th sitting of the House of Representatives.

Opposition Member of Parliament for Naparima, Rodney Charles in asking the ninth and final question to the Prime Minister: “Will the Prime Minister inform the House if there exists a “Use of force” policy which includes the use of tear gas as a crowd control measure?” Charles asked.

In response, the Prime Minister said: “If the member for Naparima was serious about this question he would have known that in the police service there is and has been for the longest while the use of force policy which includes the use of tear-gas as a crowd control measure. Madam Speaker, Trinidad and Tobago police service department order 1:26 of 2019 includes the use of force policy addressing gasless lethal force(that is tear gas) by Guard and Emergency Branch.” The Prime Minister reasoned that the Naparima MP was fully aware of this and was simply, “Seeking to engage in misinformation and mischief.”

Dr. Rowley when called upon to answer reasoned: “I do not know of any young children who find themselves making decisions to go out and break the law causing police to fire tear gas at them. If you are concerned about young children that you have then you as a parent must be concerned and not put your young children in harm’s way.”

Last Sunday, a group of about 300 civilians including children and the elderly ventured around the QPS to protest the government’s handling of the Covid-19 pandemic. The protesters were met by Guard and Emergency Branch Officers who fired tear gas. Later, a father of two young boys took to Social Media to complain about the impact that the weapon had on his sons. In addition, a mother and her two daughters along with her four-year-old grandson who was going around the savannah and not involved in the protest at the time said that the tear gas had come through their vehicle although it was closed up.

On Sunday in a media release the Opposition Leader Kamla Persad Bissessar had stated that Prime Minister Dr. Keith Rowley had crossed the line into dictatorship territory. She referred to the incident as “Bloody Sunday,” and up to Tuesday was calling on the Prime Minister to say whether or not he had ordered the use of tear gas on men, women, and children who were demonstrating for their rights and freedoms.