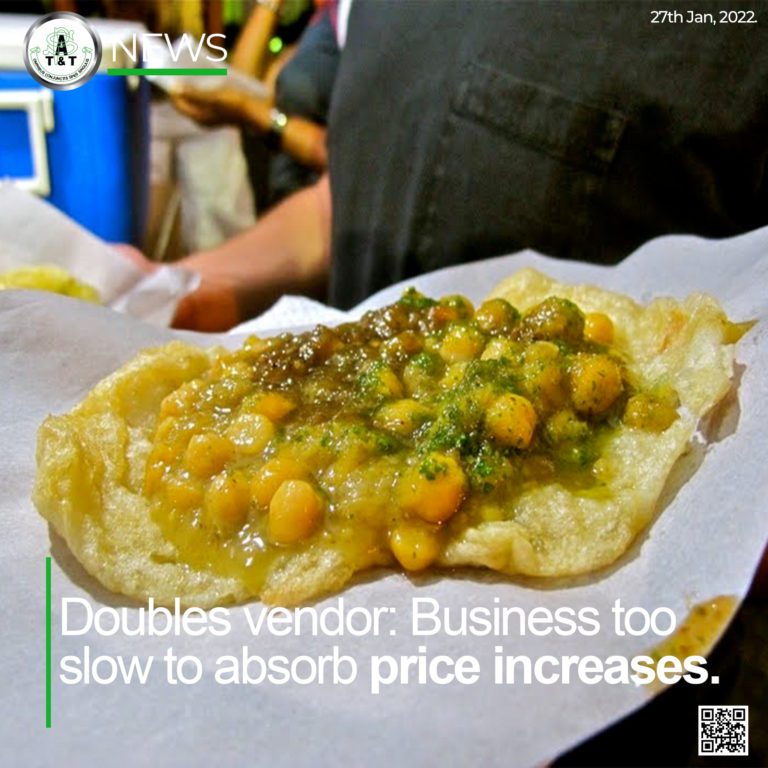 One Diego Martin doubles vendor told PSA media earlier this month that he had no intentions of increasing his prices; two weeks later, he’s singing a different tune.

PSA media checked in with a Diego Martin vendor who, like many across the country, increased doubles by $1.00. He explained to us that at first he tried absorbing price increases but he could no longer do so, keeping in mind that business is already slow as many are still feeling the effects of the pandemic.

When asked if he took into consideration the working class and many who would have lost their jobs due to the pandemic, he said, “Yes I did take that in consideration which is why I was absorbing prices.”

Saying he has received no complaints since his price increase, he said people seem to be understanding. Responding to the current state of the economy he said, “I holding on right about now because everything tuff, everything is too slow to make back the money, but I’m self-employed so I have to do the best that I can to hold on.”

National Flour Mills implemented an increase on the retail price of Hibiscus flour of 10 percent and Ibis flour 17 percent on January 3rd with the Ministry of Trade and Industry intervening to mitigate at least some of the increases from trickling down to consumers. According to NFM, this was needed in order for the company to remain viable and was also due to the increase in international wheat costs as well as operationalization costs.

This led to the Kiss Baking Company immediately increasing the cost of some of their bread items but left some doubles vendors contemplating. This as they have been incurring increases outside of flour such as channa, for some time now.

Last week the very popular Sauce Doubles team announced price increases of  Doubles moving from $5 to $6, triples to $8, and Sheena to $6 for one.

Many vendors are saying that continuous price increases in basic food items are causing a domino effect and are also becoming unavoidable.