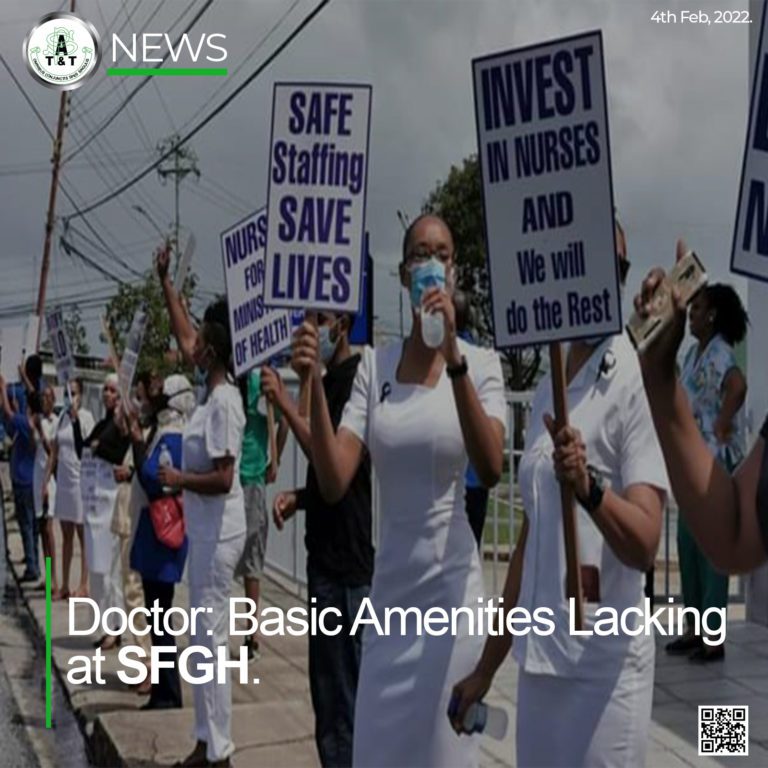 The lack of basic amenities, cleaning supplies, and medication were just a few challenges that employees at the San Fernando General Hospital said that they faced every day.

Those were some of the concerns voiced to PSA Media when they visited the hospital alongside Public Services Association(PSA) Industrial Relations Officer, Ricardo Goolcharan on Tuesday.

In speaking to staff, one doctor lamented that he was fed up with the lies being told by the management of the South West Regional Health Authority(SWRHA), as well as the health minister.

“Honestly, it makes me angry, and then it makes me very sad as a professional. It makes me angry because our public relations department gives out statements and especially reports sent by our CEO to the minister and they say that the wards are properly well-stocked, proper bed spacing, the nurses are coming out to work. There is proper staffing and then that makes me angry.”

He continued, “That makes me angry but then it is sad to know that they lied and the staffing is actually horrific. But at the end of the day, it is the patient that suffers most. The staff does suffer yes but they suffer in respect to burning out themselves to ensure that the patient does not suffer.” He added: “So it is actually a ripple effect and the patient suffers anyhow. And then the staff is burnt out trying to do their best with the little that they have.”

According to the doctor when he spoke to PSA Media, most patients are very understanding when they are told about the challenges faced by the healthcare workers but he pointed out that there are a few who would lament, “Why you do not have it! They thief it! Ent the health minister said that it is fully stocked.”

The doctor noted some of the basic amenities that were a problem to get on the wards.

“Currently, for the last few months, there were limited to no supply of sterile or non-sterile gloves at varying times. And when I say few months. This has been going on since January 2021. So, it’s been a year there has been a limited supply of gloves. A very limited supply of surgical tape. Ivy lines, soap to wash hands, solutions such as methylated spirit. There has been no iodine on the wards for the past three years.” The doctor noted that to make up for some of these shortages they have had to improvise and gave an example with the iodine by saying that they use savlon to compensate. He said.

When asked how has Covid-19 impacted the problem faced by staff at the hospital, the doctor noted that the problem was always there but Covid-19 simply heightened it.

Another worker on giving feedback to PSA Media noted that the staff is demoralized and demotivated.

Weighing in on the situation via Whatsapp message, PSA ILO Ricardo Goolcharan relayed a message to those who have lost loved ones during the pandemic.

“The system has failed your loved ones. A system that never did a manpower audit to ensure that the prerequisite staffing for all institutions was done. The system failed your family because the human resource was deficient before Covid-19. It was exacerbated by the redeployment of staff to the parallel health system.”

“Those same doctors and nurses and all the support staff became overwhelmed. The staff to patient ratio is atrocious. The real question remains why our system fails to address the human and material resources deficit. Hiring just over 1,000 plus staff was just a drop in the bucket for what was needed. Compounded by an exponential loss of staff due to migration.”Goolcharan said.

He noted that it raises the question of why do workers think that migration is the key to solving their problems but said, “It raised another topic that must be researched.”

However, he cautioned that workers are not to be blamed since many are overwhelmed and are working beyond expectations. “The pandemic has shown the vulnerability of the health system that has failed workers and more so the citizens.” He added: “If only the workers’ stories can be told then you will never stop crying.”

When PSA Media tried contacting the Chief Executive Officer(CEO) of the SWRHA, Brain Amour at least three times, all calls to his phone went unanswered.