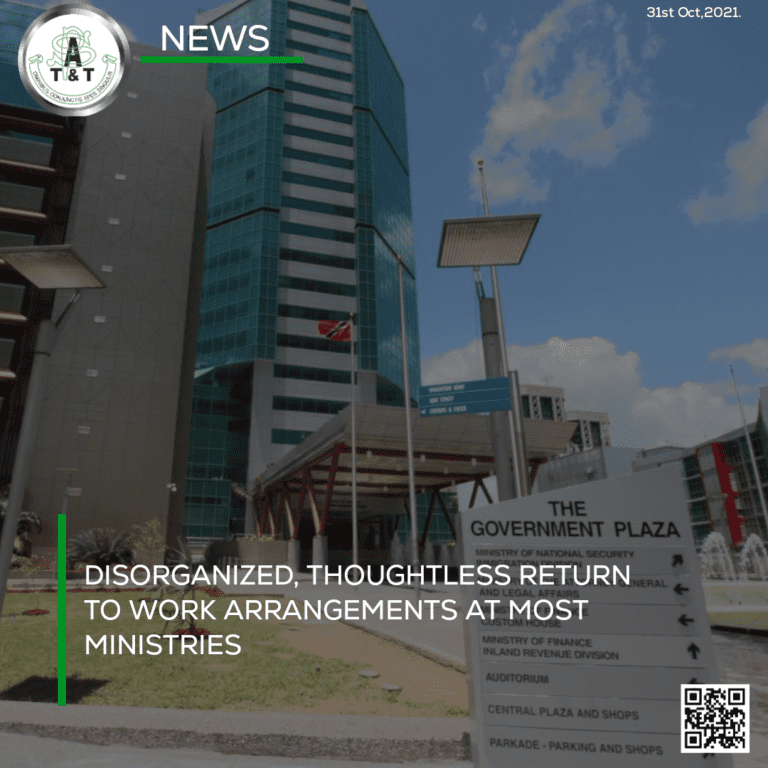 Public Servants have begun voicing their concerns over several Ministries’ heads that have shown a lack of consideration for parents and guardians who have underage children.

The issue amongst parents and guardians comes after some Ministries have ordered staff to return to work for a full five days beginning on Monday, November 1. This, after Prime Minister Dr. Keith Rowley in his last Media conference on October 16 indicated that public servants will be back out to work.

Speaking anonymously with PSA Media today, there was a mixed reaction amongst public servants with some saying that nothing has been put in writing or announced at their respective ministries for single parents or others who have children that need daycare services, attend primary school, or belong to Secondary school Standard Forms one to three.

A staff member at the Ministry of National Security lamented that there were a few staff members that she knew personally that would be affected. “Nothing whatsoever has been said about that. Not even a conversation has taken place,” she said.

Another single mother, who has three children, one aged three, and the other two below 14 years stated: “My immediate supervisor told me that nothing has been put in place as yet. They will see what the Prime Minister says when he speaks on Saturday. But so far the HR Department would have sent out an email telling staff to come out for the full five days.” A Ministry of Local Government and Rural Development staff member revealed that, even during the rotation system it was challenging for her although she was only asked to come out for two days. She said that on those days she had to leave her two older children unsupervised at home while they did online classes and the three-year-old was placed in a daycare service that was not supposed to be open. She noted, “I really had no choice.”

At the Ministry of Social Development and Family Services, one worker indicated that an email was sent to staff. It partly read, “Staff members who may wish to have some exceptions made should refer to their Supervisor, where situations will be assessed on a case by case basis. To this end, Heads of Divisions and Supervisors are required to indicate such situations for approval by the Permanent Secretary. Such requests MUST also be supported by relevant information, namely, the child’s birth certificate, school details, and other relevant documents upon request. It should also be noted that All Heads of Divisions and Supervisors are required to be out to work in full. Therefore, attendance and punctuality reports are to be submitted on a monthly basis; and HODs will be required to manage these aspects of the daily operations.”

Nonetheless, the worker noted that the reaction of the Ministry for staff to return to duty at 100 percent was not what the Prime Minister had indicated in the October 16 media conference. She said: “They have cut and pasted what they wanted.” She said the Prime Minister never meant that everyone should return to the office at the same time for five days. She noted that she had received a memo from a friend at the Education Ministry and it was better crafted and more professionally done.

An October 16 summary post that was written after the Prime Minister’s media conference and posted on the Office of the Prime Minister’s Facebook page informing viewers of the updated measures taken by the government to reopen the economy reads: “The Public Service to begin returning to work in larger numbers.”

At the Health Ministry, one worker said: “As far as I know I am still on rotation. My daughter is still in primary school and therefore I was trying to find out through the grapevine what are they going to do, so an officer who works close to the director and stuff said from what she knows what they want to do is people with children 15 years and under will continue on rotation.” She admitted that nothing had been said officially about it though.

On October 22 the Education Ministry had sent out a circular memorandum headlined “The working arrangements during the Covid-19 pandemic”. In it, the Prime Minister’s message on October 16 was highlighted. The memorandum read, “That from November 1, 2021, Public Servants will be called back to work in an organized way and by the end of November most, if not all, should be back to work in full. The Chief Personnel Officer’s(CPO) Circular Memoranda No.1 of 2020 dated June 1, 2020, and No.4 of 2020 dated October 30, 2020, remain relevant.” The memo also informed staff members: “You are invited to submit proposals to the Permanent Secretary for the facilitation of alternate working arrangement in your respective Units/Sections/Divisions, bearing in mind the above-mentioned imperatives. Staff members who are parents/guardians of children who require care and supervision, or who have other extenuating circumstances, are required to submit requests to vary their working hours, which will be entertained and reviewed on a case-by-case basis. Such requests are to be submitted with supporting documents and with recommendations, through the relevant Supervisors and Director, Human Resource Management, for the consideration of the Permanent Secretary.”

In October 2020, when Prime Minister Dr. Keith Rowley had ordered a full turnout of Public Servants, the Public Services Association(PSA) President Watson Duke had reminded that the Public Service circular No 3 of 2020, agreed to by the Chief Personnel Officer(CPO) and PSA, also protected staff who took care of their children. According to the PSA President at that time parents/guardians are torn between going to work and not leaving their children unattended. Duke also notified that according to the Children’s Act if anything goes wrong with a child who is supposed to be under a parent or guardian’s care, the latter will be jailed.

On the Office of the Prime Minister’s Facebook page, Dr. Rowley has not indicated if he will host a Saturday media conference.