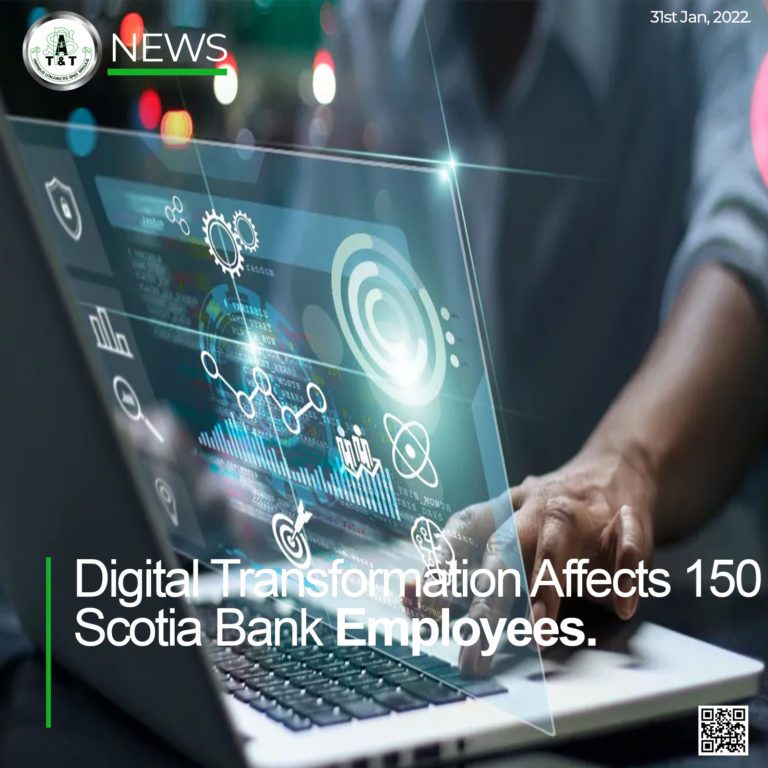 A banking institution that reported a 16 percent improvement in its profitability at the end of 2021 will lay off close to 150 workers in Trinidad and Tobago in 2022.

Last week Scotia Bank Trinidad and Tobago announced several changes to its operations that will come into effect between March and May. Including amongst the changes will be the closure of several branches.

The company cited globalization and digital transformation as the reasons that the decisions were made saying there was a growing trend of customers doing fewer in-person transactions.

As reported in at least two daily newspapers, an email was sent to staff of the company stating that: “Upcoming changes will result in the consolidation of certain support services and back-end functions, including the consolidation of a part of our collections unit into our global business services hub in the Dominican Republic – which also currently services our Canadian operation. Over the next few months, OSSCL (Operations and Shared Services Company Ltd) will also be impacted by the expiry of some operations functions that support the divested Eastern Caribbean territories.”

As reported in a daily newspaper last December 15, Managing Director of Scotiabank Trinidad and Tobago Limited, Gayle Pazos said that despite the challenges posed by the ongoing Covid-19 pandemic, “The Group has recorded improved financial performance.”

According to a statement from Scotia Bank, two branches in San Fernando have been carded for closure by March 18. Those are Cipero and Rushworth branches. The operations at those branches will be moved to the High Street branch in San Fernando.

Two other locations in Port-of-Spain are also scheduled to be locked off by April 14. The operations at the  Park and Pembroke branches will then be transferred to the Independence Square Branch.

In addition, the Cunupia Sales Centre will close on March 25 and its operations will be consolidated into the Cunupia Branch.

While the banking institution admitted that the decision to close at least two of its branches and retrench some workers had been made since November 2021, it also noted: “These decisions were not taken lightly and we will ensure all employees are treated fairly and with respect as they transition employment.”

Also according to an article posted on its website, Scotia Bank had won the best AI Initiative award from The Digital Banker in November 2021.