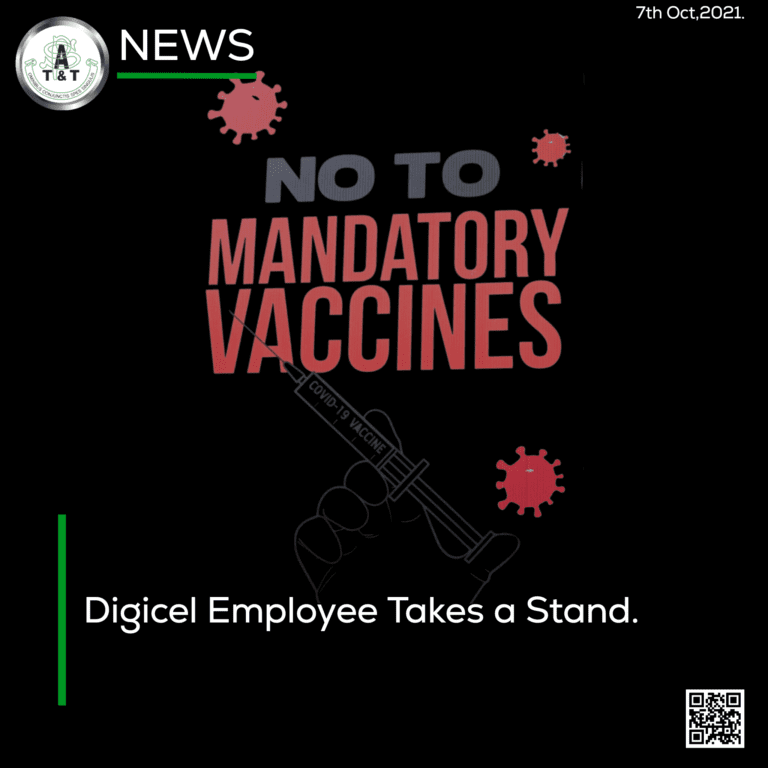 “Either Digicel think people will not stand up for their rights, they do not know their rights or they think they can do whatsoever they like because they think everyone in Trinidad is pushovers.”

That was the sentiment put forward by a Digicel employee, who said that she has already visited a lawyer to fight her case against the mobile telecommunications operator that has its operations in over 33 countries. The woman who asked only that her name is not published said she had read a little about what the industrial court’s president Deborah Thomas-Felix said and she is not afraid to challenge her employers.

In a series of memos she had someone forward to PSA media via WhatsApp, one of them dated September 29, the Digicel Group from its headquarters in Jamaica sent out a memo to staff stating, “By the close of business on Friday 15 October 2021, all employees should submit their vaccination card showing proof of vaccination-whether partial or full to HR.” The alternative given by the memo, “Employees who are not vaccinated as of Friday 15 October 2021 will be required to submit a negative PCR test result taken in the preceding 72 hours every two weeks to HR. This will permit them to attend work. These tests will be done at the employees’ expense.” The memo also stated that antigen tests will not be accepted.

In a subsequent memo that was sent out the following day, Digicel’s Chief Executive Officer(CEO) of Trinidad and Tobago, Abraham Smith, pin-pointed the health ministry’s warning that the delta variant had reached community spread and was a deciding factor for the company’s decision since the company had previously used other means over the past five months to keep all their stakeholders safe.

However, he pointed out that, “Here in T&T, vaccines are widely available across the country and we continue to share information on how to access vaccination sites as we continue to support the country’s return to the new normal.”

Also included in the September 29 memo were directions from the Digicel Group stating the penalties employees would suffer if they chose not to submit their polymerase chain reaction(PCR) test. These penalties include taking the days as unpaid leave or have them subtracted from their vacation allowance. The memo also made it clear that no provision will be made for staff working remotely and said that new hires must be fully vaccinated.

However, the employee who described herself as one of Digicel’s best customer service representatives and has eight years of service at the company said she is neither going to vaccinate nor does she intend to submit a PCR test. She said, “If Digicel is serious then vaccinated employees should submit a PCR test also because the virus does not stop with them according to science.” According to her, “Nobody is going to force anything into my temple that I do not want there.”

She stated: “Not because Digicel does not have a union they will do workers that.” She said, unlike others, she is not afraid to lose her work.

Although a line in the September 29 memo sent by Digicel Group to staff reads: “We are aware of the legal position in some markets and will approach these on a case by case basis,” the company’s approach came about two weeks shy of the Industrial Court’s president, Deborah Thomas-Felix reiterating a legal position that she had previously stated: “The introduction of a Covid-19 vaccination policy or any new policy can amount to a material change in the terms and conditions of employment and ought to be imposed unilaterally.”

The Industrial Court’s president had at the time also indicated a point in the Occupational Safety and Health Act(OSHA) that the Public Services Association(PSA) and other unions have been telling employers, “This country’s OSH Act also provides that safety and protective measures in the workplace “shall not involve any expenditure for workers,”