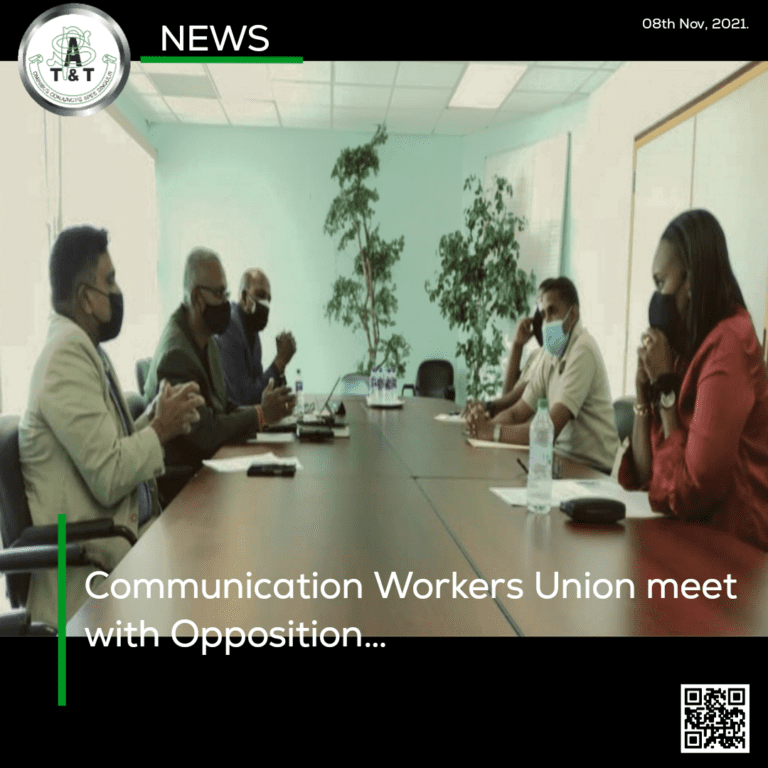 According to a statement from the Opposition, The meeting was to discuss mapping out a course of action in defense of our nation’s constitution, democracy, rule of law, the principle of the separation of powers, and the promotion of effective and meaningful people’s participation and power in the democratic decision-making process of our nation.

During an interview with PSA Media on Saturday, Secretary General of the Communication Workers Union emphasized that his union remains completely independent of any political organizations. He said during the very cordial meeting, it was agreed that Trinidad and Tobago is not in a very good place.

Elder said, “The Communication Workers Union remains fiercly and fearlessly independent of all political parties. So even though we met with the UNC, we are in no way affiliated or part of or looking to be in bed with any political party.”

Despite this, Mr Elder told PSA media that he did not spare the opposition on their handling of situations and repeated blunders in the public domain. This he said is not proper representation as the citizens of T&T are expecting more.

“I did also level some criticisms of the opposition, to the opposition, a lot of those I levelled against them is that they are not being strong enough, forceful enough as the opposition on behalf of the citizens of T&T,” he explained.

Elder added, “I would highlighted some of their short comings, some of out disappointment with their actions, or lack thereof, their behaviour and their statements made by top members…. What we getting right now is not what the citizens deserve or expect.”

Elder said the opposition accepted the union’s independence and took all critisicism uas constructive as he assured there is no ill will toward any party.

Regarding the collapse of the Police Service Commission, elder said that the fact that T&T is now without a police commissioner poses a threat to the democracy and security of T&T as well as the current state of the country were the only agreements at the meeting and none on engaging with the Opposition.

When PSA Media asked about a meeting with the PNM administration, Elder said, “Of course the answer is yes. We will go whether it’s PNM or UNC.”
He further stated that despite the union’s history with either parties, the interest of T&T’s citizens must be put above anything else.

As such he again reassured that the meeting with the opposition was solely in the interest of the people as the government must be reminded that other interest groups will speak out.

“We also need to ensure that the government is also not made to feel that they are Lord onto themselves, that no one is looking at them…. There are other interest groups and civil society groups that care and are not happy with what government is doing,” he stated.

Elder further added that the union has written to the Minister of Public Utilities and Prime Minister Dr. Keith Rowley numerous times and is yet to receive a response.