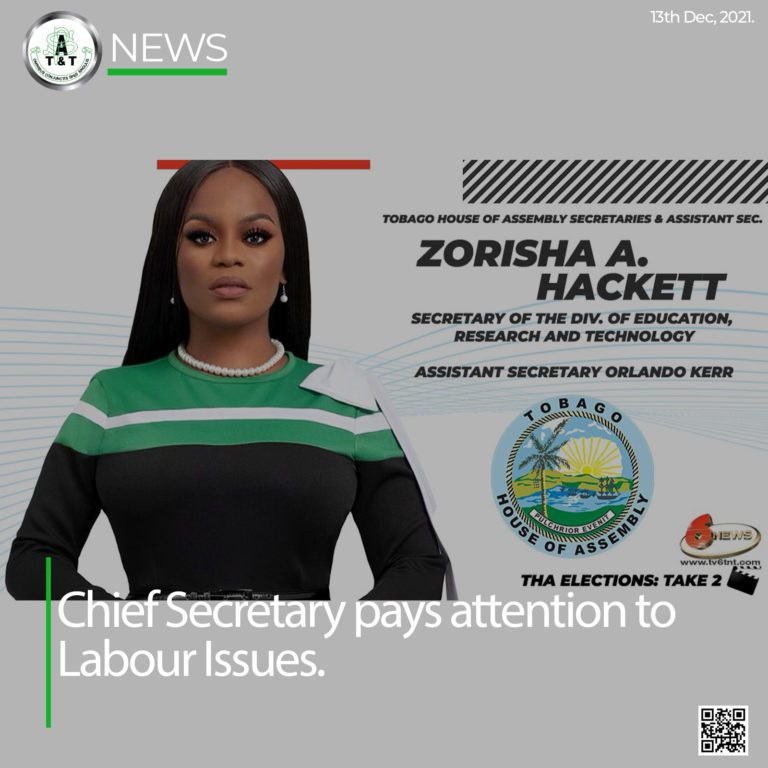 Acknowledging that the Progressive Democratic Patriots(PDP) has a large trade union membership in its political ranks, newly elected Chief Secretary, Farley Augustine wants to make use of that expertise to help fix the labour  and public service issues in Tobago

Chief Secretary Augustine made the point at a media conference on Friday where he delegated the various divisions to secretaries and assistant secretaries from among the winning candidates and appointed councilors. The Division of Education, Research, and Technology was handed over to Secretary Zorisha Hackett and Assistant Secretary Orlando Kerr.

In his presentation justifying the realigning and streamlining of the various divisions, Augustine said: “You will note that the former TTUTA Tobago President is the Assistant Secretary here and I have said to them in no uncertain terms that they better fix the issues with all teachers who need their increments, upgrades, who are on contract, who have outstanding gratuity. They have to find a way to fix it. They have to find the money and a way to fix it. It’s long outstanding and it has to be fixed, it has to be remedied.”

“I believe we have a strong team here. Both individuals were educators at secondary schools. One of the individuals was even involved in a lawsuit against the THA and won.” Augustine went as far as pointing out that the matter had to do with gratuities and remunerations and the type of contracts the teacher was given. He said due to the experiences shared between both individuals he expected them to sort out the issues.

Another portfolio that Secretary Hackett and  Assistant Kerr would also be responsible for will be the technology and in particular, digitization which Augustine noted will aid the THA accounting and help, “Avoid some of the pitfalls that the auditor general has time and time again highlighted for us.” Augustine said.

He also noted that under the PDP’s guidance he desired that the Tobago House of Assembly(THA) lead the nation in e-governance. He noted that digitization of the THA was essential since he wanted to establish the equivalent of the Central Statistical Office(CSO) in Tobago. According to Augustine, it was nearly impossible to run a successful government without adequate research being done. To achieve that initiative he noted that the THA under the PDP would restart the Policy, Research and Development Initiative(PRDI) that was started under the Hochoy Charles administration and set up by Dr. Vanus James.

In addition, Augustine noted that councilor Certica Williams Orr will work out of the office of the Chief Secretary and will have a special focus on public administration, planning, and labour. According to him, “That is because we made a pledge to workers in Tobago to fix the public service issues, the labour issues that we have with contract issues.” Augustine said that he brought on Williams-Orr to deal specifically with those kinds of issues since she was a senior public servant who understands how the service operates. He also indicated that she worked in Human Resources for a while. He said, “She understands it very well and so I expect her to bear upon the portfolio that ability to move and fix issues in the establishment and provide the kind of leadership that is necessary.”

Further to that, the Chief Secretary expressed some sympathy with public servants noticing that they have been mistreated and abused for many years. He said: “It is difficult to ask someone who has been on contract for donkey years and getting their gratuity late and knowing that they have no big retirement money to collect to somehow be always on time, to work later than the hours allotted, to give extra to do more.” Augustine said.

He continued: “I want to do two things. I want to demand more of our workers but I also want to make our workers comfortable and happy. So, when I demand more you cannot complain because I have made your working conditions better and therefore it puts me in a morally superior position to demand more from you.”

Augustine also made it clear that an academy for the public service that was announced by his predecessor, Ancil Dennis will be continued since it is not only necessary but something that the PDP had also advocated for. He said that the academy will be used to treat with the work ethics in the public service and also to give persons a sense of pride in their workspace.