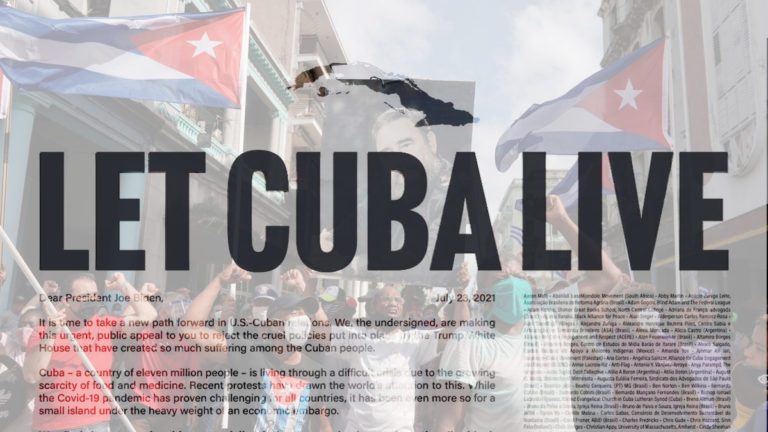 The Building and Woodworkers’ International (BWI), representing 12 million workers worldwide, supports a United Nations Resolution passed by 184 countries on 21 June urging the United States to end its nearly 60 years of economic embargo against Cuba.  BWI also joins the international community in calling US President Joe Biden to immediately revoke 243 new blockade measures implemented by the Trump administration, including the more than 50 measures which were imposed at the start of the COVID-19 pandemic.

The fact that the UN has been calling for the lifting of the embargo for the last 29 years points to its inexpediency. The United States’ continuing economic embargo imposed on Cuba, especially within the context of a raging pandemic, is unjust, inhumane and downright cruel. The US government’s insistence on this blockade amidst a global health crisis doesn’t advance the rights and welfare of the Cuban people, and democracy in general. It is only abetting the pandemic and causing needless suffering.

BWI understands the legitimate grievances expressed by sections of the Cuban population, especially by young people, to their government’s response to the pandemic, which unfortunately, was severely undermined by the US embargo. The Cuban people, like the rest of us, deserve the best medical services to protect themselves from COVID-19.

Thus, BWI calls on the Biden administration to heed the call of the international community to lift the embargo and let Cuba live. Where his predecessors have failed, President Biden has the unique opportunity to deliver by ending the embargo and leaving behind a legacy of solidarity and healing between the two countries.

BWI also joins the international trade union movement as they express their support for the Cuban trade unionists and workers who bear the brunt of the immoral blockade. Wherever and whenever workers are suffering and oppressed, it is incumbent on trade unions to act.

Lastly, BWI expresses its working-class solidarity to the Cuban people, particularly the trade unionists and workers under the National Union of Construction Workers of Cuba (SNTC) and the Workers’ Central Union of Cuba (CTC) as they carry on despite the overwhelming challenges. We recognise the Cuban people’s international effort to help stop the spread of the pandemic by sending their best doctors and nurses to countries where they are needed despite their own domestic needs. This extraordinary act of selflessness and solidarity did not go unnoticed. The global trade union movement pays tribute to this by amplifying, more than ever, the call for the immediate and unconditional lifting of the US embargo against Cuba.