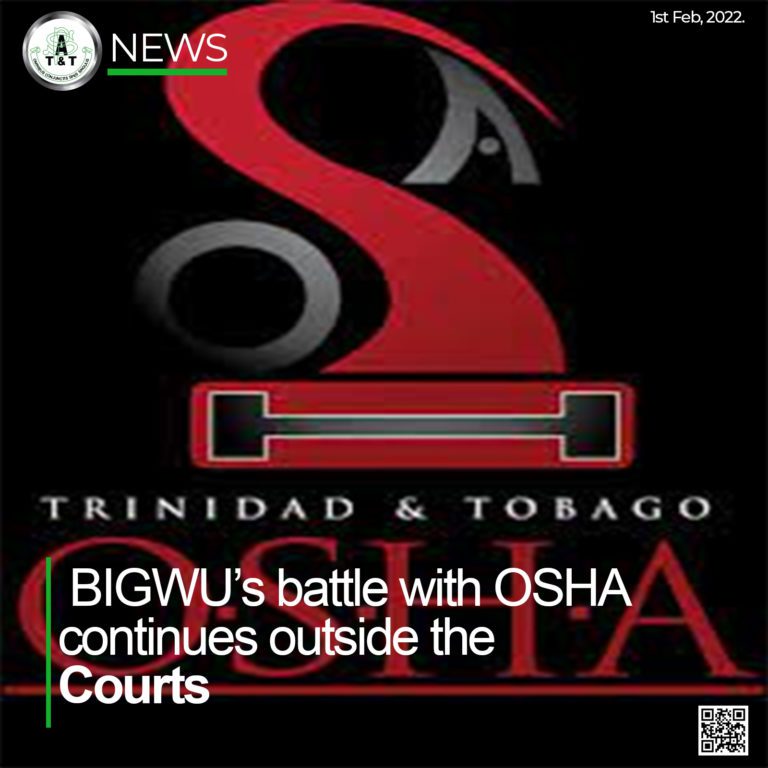 “The irregularities continue at OSHA. They are not only defying the Court’s Order regarding short-term contracts, but payment of gratuity owed to some inspectors are outstanding.”

Those were two concerns put forward by the Banking Insurance and General Workers Union (BIGWU) Labour Relations/Safety and Health Officer, Wesley Francis when he spoke with PSA Media today.

According to Francis, on September 20, 2021, an order was handed down by the Industrial Court stating that the terms and conditions of nine (9) Safety and Health Inspectors were to be reinstated at the Agency following their three-year fixed-term contracts, and not the short-term three-month contracts that the management at the Agency had unilaterally altered and offered to workers. The date for the reinstatement was October 15, 2021.

The Court had noted that the short-term contracts were contrary to the terms and conditions that were established by the norms and practices of the Agency, and the Agency was found guilty of having committed Industrial Relations Offences although not fined but was further ordered to restore the terms and conditions of the affected workers, including Gratuity, Vacation and Sick Leave by October 15, 2021.

However, Francis noted that this change never happened and the union was forced to pursue, “Contempt of Court proceedings against the Agency which was heard on November 16, 2021. As stated by Francis in a letter he sent to the Agency, “Although no penalty was imposed on the Agency, His Honour opined that the Agency had failed to once again engage the Union, noting that its letter dated October 8, 2021, addressed to the Court, was never served on the Union until October 25, 2021, ten (10) days after the terms and conditions were Ordered to be restored, and instructed the Agency to engage the Union in discussions regarding the continued offense.”

Furthermore, Francis pointed out that upon the Union checking the statuses of other workers at the Agency as of January 2022, there were in total 19 workers that continued to be affected by the short-term contracts, including six (6) who were part of the September 20 Court’s Order, and were also owed outstanding gratuity payments for their last end of the contract period.

When contacted later on Monday, Francis noted that the Agency had accepted BIGWU’s invitation to meet for discussions on the ongoing situation on  3 February, however, he noted that he is almost certain that they would have to seek the Court`s intervention to have the situation resolved once again, given the tenor of the letter received from the Agency.