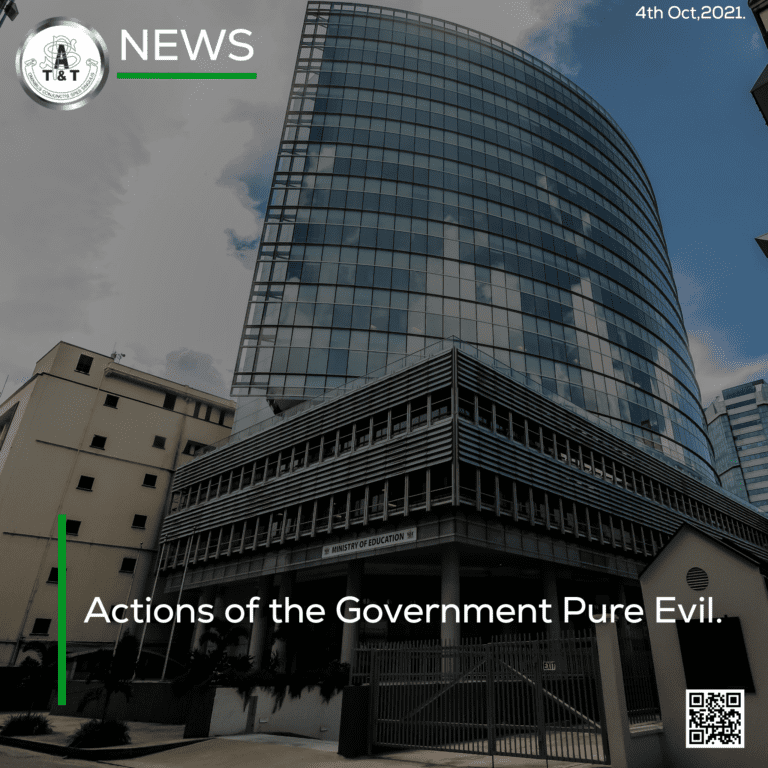 Today at 9, the First Wave Movement is set to protest at the Ministry of Education with parents of unvaccinated children that are in forms 4, 5 and 6. The Movement will be asking that the government reserves its position on their decision to allow only vaccinated students back into physical school.

On a call with PSA media, Mrs.John, secretary of the First Wave Movement, stated that they were going to deliver a letter demanding that the ministry change its position regarding discrimination on the unvaccinated children.

“We are not in support, and we want to make a very strong statement, that Trinidad and Tobago are not prepared to accept discrimination against children who we have heard from medical experts time and time again are least likely to contract Covid-19,” said Mrs. John.

She continued saying “we would never support any type of discrimination ,” especially when it comes to the education of childrenbecause they are the future to challenge and deny children education is considered evil as far as we are concerned.”

Mrs.John stated that the what the government was doing was the worst type of discrimination as it was putting a large group of children at a disadvantage, saying “We heard from many parents that the teachers from schools are saying they will not be receiving any other classes other than Google classroom.””

One example she gave was Fatima College where she claimed they told childrenwho are unvaccinated that not only would they not be able to attend school, they would also not be able to get online classes they would only receive assignments.

“This could never be tolerated and I do not believe that the people of Trinidad and Tobago will sit down and look at this happening and do nothing after our taxes would have been a major contributing factor to the education system,” she said.

In accordance with the Inclusive Education Policy subsection 8.3, it clearly states:

Inclusive education is based on equality of opportunity. All learners irrespective of ethnic origin, gender, disability, or additional educational needs shall have equal opportunities to develop their skills and abilities to the best of their potential. Inclusive Education provision is not confined merely to the delivery of services within the parameters of a school building, but rather, it requires that the very process of education, the system, structures, and social contexts within which learning occurs, must be inclusive. All children can learn and should be equally valued. Schools are an integral part of that community and, as such, should be accessible to all irrespective of individual differences or challenges in accordance with the law.

“A lot of children have already fallen out of the education system because of the extended lockdown, they made no provision for parents,” she continued. Stating that she could not understand how a government voted into power by the people could be so comfortable taking an evil position.

The protest, which will last from 9-3, will happen every day until the government reserves its position stated the First Wave Movement, today is furthermore, the first day of face-to-face classes for vaccinated forms 4, 5, and 6.