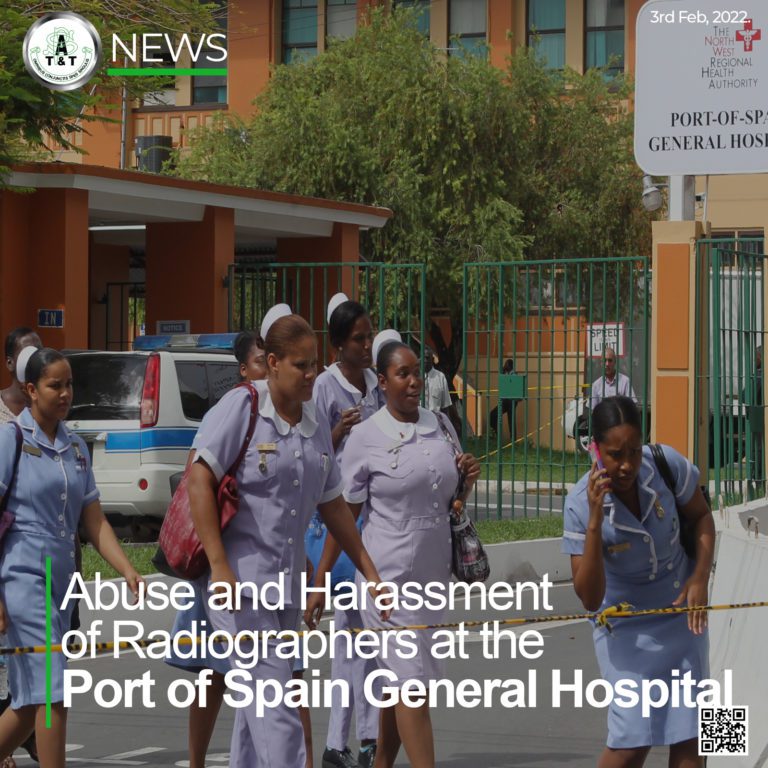 After months of harassment and bullying from the management of the North West Regional Health Authority, Radiographers attached to the Port of Spain General Hospital are finally speaking out. These workers say that management does not recognize or treat them as human beings with feelings and families, but rather as dispensible objects or more like slaves. These workers say that management constantly disregards the need to consult on matters which impact their lives and they are absolutely tired of it.

Criticizing the Acting Senior Radiographer who also holds the title, Manager Patient Support Services, these workers said she took over the department in February 2021 and by April started disregarding agreements between their union (PSA) and management regarding their shift arrangement. The radiographers stated that amongst all their complaints, the scheduling/rostering of staff remained the most frustrating.

The Radiographers have since returned to their original terms and conditions of employment which is working Monday to Friday from 7:00 a.m. to 3:00 p.m. They said due to the increased workload the Radiographers through the PSA agreed to facilitate the institution and work a shift system under specified terms, but the management has now disregarded the terms of the agreement saying that they are shift workers. The workers say that they are tired of the abuse and victimization meted out to them by the Management of the NWRHA.

Felisha Thomas – First Vice President of the PSA told PSA Media that the Management of the NWRHA has now resorted to issuing warning letters and forming disciplinary tribunals in an attempt to either force workers back to into a shift arrangement or terminate their service. She stated that these workers have been employees of the NWRHA for over ten (10) years and management must engage in consultation regarding any change in their terms and conditions. Ms. Thomas also stated that this matter is now before the Industrial Court but the NWRHA is attempting to act on these workers outside of the ruling of the court. She stated that the PSA’s attorney Mr. Newton George will be representing the workers on this matter.

Ms. Thomas stated that from the onset of this issue, the Radiographers tried very hard to resolve their concerns through bilateral talks which were unsuccessful. While management stated overtime to be one of the issues to be resolved through the changed roster, Ms. Thomas noted that the department is short-staffed and while management refuses to pay their employees to cover the additional shifts, they willingly pay persons from outside to do it.

PSA Media contacted the secretary of CEO, Salisha Baksh, and was told that we can expect a return call from an Industrial Relations Officer, Ms. Sheena Ragoobar who never called.

Ms. Thomas stated that it is disturbing to know what health care workers in this country face on a daily basis. She stated that the persons who are tasked with the responsibility to provide care for the citizens of this country are abused on a daily basis, and that is something she hopes the Minister of Health would shed a tear for and intervene in a meaningful way on behalf of health care workers and by extension the citizens of this country.