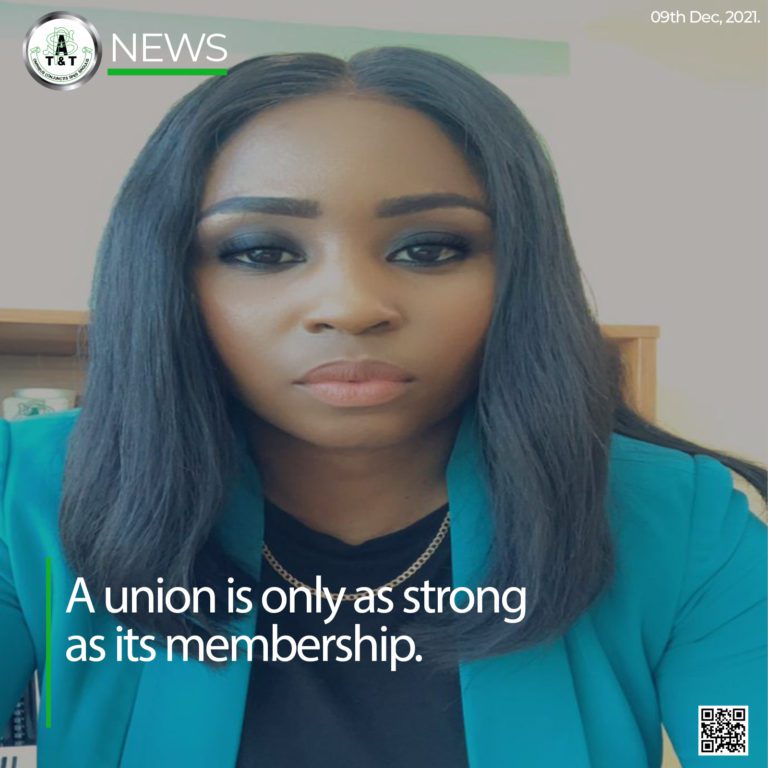 Felisha Thomas, First Vice President of the Public Services Association(PSA), has drawn inspiration from her comrade and President’s victory and urged public servants to take an example from the people of Tobago and unite to seal the salary negotiations proposal that has been put forward to the government at least two years ago.

In a congratulatory note posted to the association’s PSA Trinbago Facebook page, the PSA second in command whose signature is on the note stated: “Just as the people of Tobago stood together and broke free of the bondage in which they have been held, you too must say no more and let us come together as one to defend our jobs, ensure that negotiations are settled and our futures secured.”

She reminded that it was the Minister of Finance who had failed to put a counter proposal to what the PSA had already forwarded to him since 2019. In a short interview with PSA Media this morning, she said, “People are calling on the PSA to start negotiations when in fact negotiations for 2014 to 2016 have already been concluded.”

She noted that in 2019 the PSA held meetings with the Chief Personnel Officer(CPO) on St. Vincent Street and the National Academy for the Performing Arts(NAPA), where salary negotiations were discussed. According to Thomas, those meetings were open to the members who wanted to attend and wanted to witness what was taking place.

Referencing a video that had gone viral a few years ago with Finance Minister, Colm Imbert stating that he had raised the gas price, time and time again, and the population had not yet rioted, Thomas noted that it was likely that Imbert saw salary negotiations through the same lens.

Her congratulatory note complimenting the PSA President, further read, “The Public Services Association of Trinidad and Tobago wishes to extend congratulations to its president, Comrade Watson Duke and the Progressive Democratic Patriots on the annihilation of the PNM in the Tobago House of Assembly elections.

Monday 6th December 2021 was a day to be etched in our books of history as a 40-year-old organization was obliterated by a 5-year-old organization. This to us speaks volumes of the great capabilities of Comrade Duke as the Political Leader of the PDP and President of the PSA.”

It continued, “Under his leadership we have seen a man who has given his heart and soul to defending people, even when the odds were always stacked against him, his wisdom and understanding has always brought him out victorious.”

Her message also confirmed Mr. Duke’s future with the PSA as she stated, “To those of you who may be concerned that the PSA will no longer be graced by the great leadership of comrade Duke, I say to you that you can rest assured that Mr. Watson Duke will remain as President of the Public Services Association to continue the great work that he has started.”

That congratulatory note from Thomas came after a bulletin from the PSA earlier in the day stated that the executive at the PSA had taken, “A unanimous and collective decision that all of the benefits and remunerations assigned to the position of the sitting President, Watson Solomon Duke of the Public Services Association of Trinidad and Tobago, for the residue of the duration of his presidency will cease. However, the President would continue to carry out his constitutional duties in keeping with the PSA constitution.”

Thomas when asked to expound on what qualities that Duke would bring to the Progressive Democratic Patriots(PDP) remarked that she had known Duke indirectly since 2015 when she was a PSA representative at WASA and he was already at the helm at the PSA, and more directly in 2018 when she took up the position on the PSA executive. She said, “He is a man of great strength and power, who takes nothing and turns it into something great. He has extraordinary vision and foresight. His love for the people of Tobago and his desire to see Tobago develop as the leading island in the Caribbean will fuel and propel his qualities.”

She went on to say that Duke is not a regular simple politician and advised that he does not change his leadership style or personality to suit anyone. He has the ability to command his space and bring people together. She commended, “The people love him just the way that he is, no need for him to change.”

According to Thomas, Duke’s strength lies in his unique personality. He has the ability to understand people and their individual issues and struggles and will not be a yes-man to any slave master. She noted that Mr. Duke will always be a man for the people and those were the qualities that Tobagonians saw in him that eventually set them free from the 21-year-old grip that the Peoples National Movement(PNM) had on the island.

When PSA Media spoke to PSA’s Second Vice President, Avinash Maharajh, he began by saying that he was not surprised by the victory nor the margin of victory that the PDP had punished the PNM because it was something the PSA President had predicted weeks ago. Maharajh said, “I have learned that his predictions usually play out.” The PSA’s Second Vice President, like Thomas, said that he too was first acquainted with Duke when he was the Chairman of the PSA /Agricultural Development Bank Section in 2015 and more closely when he rose to the executive in 2018. He described Duke as a winner who is successful at any challenge placed before him and said that he is a force of nature, very strategic in his decision-making and unwavering in his convictions to what he knows to be right and just.

Maharajh continued, “ I have always known him as an ardent defender for grassroots persons and the working class. He is a chameleon who can seamlessly transform from leading a protest on the road to leading negotiations in the boardroom.”

He ended by saying that the true character of the man is a testament to the sacrifice he has made to stay on as President of the PSA free from any benefit or remuneration. According to Maharajh, this stance was a demonstration of Duke’s commitment to workers, and the PSA that he knew would be translated to the people of Tobago.